Fortnite is very famous for their large variety of crossovers and promotions with other pieces of media, like comics, gaming, literature, film, music, culture and so much more! It’s kind of hard to track how many crossovers there have been, so in this guide, I decided to track down every Fortnite crossover as of late!

After seeing the love Marvel got from Epic, DC decided to take a piece of the metaphorical Fortnite pie with the Batman 80th Anniversary update in Chapter 1, Season X, bringing in DC Series Catwoman and Batman cosmetics, challenges, Batman weapons, Creative prefabs/galleries and Gotham City as a Rift Zone, which lasted until the end of Chapter 1. In Chapter 2, Season 1, Harley Quinn was added as an outfit to coincide with February 2020’s Birds of Prey movie, and finally, in Chapter 2, Season 3, we got the Aquaman outfit in the Battle Pass, based off the Jason Momoa version from the DCEU movies. The Aquaman event was very akin to the Deadpool event from the season prior, also bringing in Black Manta as an outfit. In February 2021, Batman X Fortnite comics were announced, and during Chapter 2, Season 6, Raven became a part of the Battle Pass. 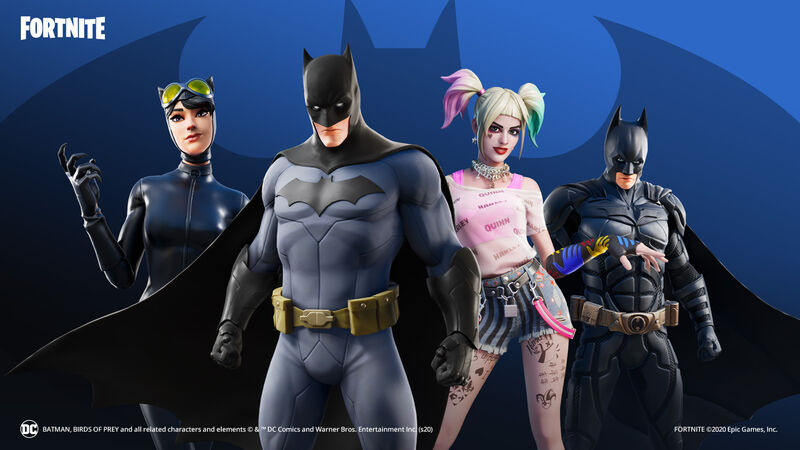 God Of War is a Sony-owned franchise, exclusive to PlayStation. Shortly after Chapter 2, Season 5 began, a possible Kratos outfit was leaked, along with a Master Chief one too. The actual cosmetics for Kratos then released, and as a bonus, on the ninth-generation PlayStation console, you could unlock an additional edit style for the Kratos outfit!

Halo is a Microsoft-owned franchise, exclusive to the Xbox. During the Game Awards 2020, Master Chief was revealed as a playable outfit, along with the Blood Glutch map from one of the Halo games as a Creative map. And as a bonus, on the ninth-generation Xbox consoles, you could unlock the Matte Black edit style for Master Chief! 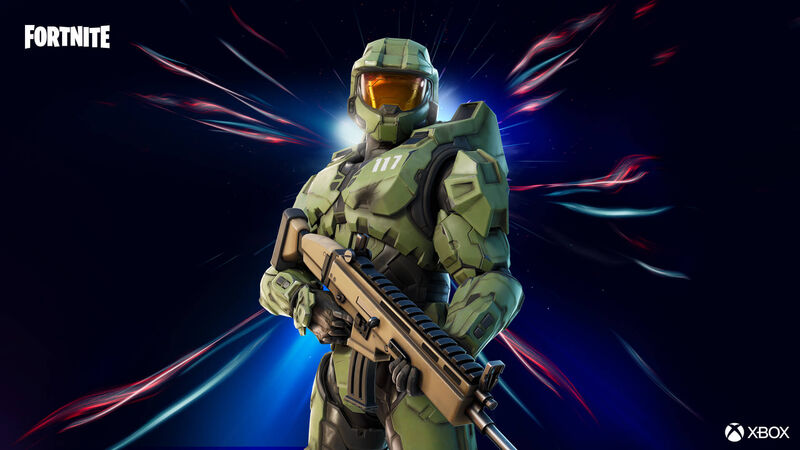 John Wick is a very popular action franchise about hitmen and assassins, and in Chapter 1, Season 3, the Reaper outfit released as Tier 100 of the Battle Pass. The Reaper was a clear parody of John Wick, and in Season 9, when John Wick Chapter 3: Parabelleum released in theaters, we got themed cosmetics like the John Wick and Sofia outfits, challenges and an LTM based off the movie. The costumes have returned every once in a while.

Jordan is a Nike brand, and is based off basketball and retired basketball player Michael Jordan, so in Season 9, out of nowhere, we got a crossover with Jordan and Fortnite, bringing in a community-made LTM made by Jordan, cosmetics and challenges. The LTM is still available to play inside Creative mode.

Lachlan is a popular Australian Fortnite content creator, and one of the most popular in the world. After teaming up with Epic multiple times, he finally got himself an official outfit in November 2020.

Loserfruit is a popular Fortnite Twitch streamer, and is quite recognizable. Anyway, prior to her cosmetic release in June 2020, we were given 2 outfits that shared resemblance to her: Volley Girl and Rox from Chapter 1. Her actual outfit was pretty cool, and came with fruit axes, backpacks and even a pretty neat emote!

Major Lazer is a popular yet underrated music group, and in Season X, we got a cosmetic bundle based off the group! In May 2020, a concert premiered in the Party Royale mode featuring the artist.

Marshmello is an electronic music artist who also happened to be a big fan of Fortnite. He and Epic Games know each other quite well, so in Season 7, Marshmello hosted an in-game concert, also bringing in Icon Series cosmetics and challenges to celebrate this event.

Marvel is a multi-billion dollar company, and is known for their superheroes and comics, creating characters like Iron Man and Thanos. In Chapter 1, Season 4, we got a Thanos-themed LTM called “Infinity Gauntlet”, which released to coincide with Avengers: Infinity War. The next year, in Season 8 when Avengers: Endgame released, we were rewarded with a new Avengers-themed LTM called Endgame, challenges and even Marvel Series cosmetics based off Black Widow and Star-Lord! In Chapter 2, Season 2, we moved away from the Avengers and got X-Force content, including Cable, Psylocke and Domino outfits, Deadpool cosmetics in the Battle Pass, and a boss, complete with Deadpool’s Dual Pistols. The next season, we got Captain America as an outfit to celebrate Independence Day and in Chapter 2, Season 4, we got Nexus War, an entire season dedicated to Marvel Comics, including a Battle Pass, POIs, bosses, and more. So it’s clear to see that Epic has a soft spot for Marvel, as no other company has received as much exposure in Fortnite than Marvel.

In Season 6, American football season was back up and running, and we found football-themed outfits in the Item Shop. These outfits were completely customizable, as you could change their team logo, number and more. We also got the Pleasant Park football stadium replaced with an American football one, and every Super Bowl, the Team Rumble LTM was replaced with the NFL Rumble one, changing your outfit to that of one of 2 teams playing in that year’s Super Bowl. They have returned every once in a while.

In Chapter 2, Season 1, a Ninja cosmetic set came out of nowhere, based off the iconic Ninja streamer, who was known for being the face of Fortnite when it came to internet personalities. He’s pretty well-known, even to people who don’t play Fortnite and released as an awesome-looking outfit over 2 years after he began streaming Fortnite.

Rocket League is a pretty well-known video game, created by Psyonix in 2015, as a sequel to 2008’s Supersonic Acrobatic Rocket Powered Battle Cars. We had a cross-promotion with Fortnite and Rocket League in September 2020 when Rocket League became free to play and introduced their new Season 1 Rocket Pass. You had to complete challenges in Rocket League to earn items for both games. Items included Battle Bus cars, Llama car decals, Octane back bling and other items based off both games. Slushii, a DJ who’s music is featured in Rocket League, also had a concert in Party Royale before the crossover officially began.

In Chapter 2, Season 1, we were surprised in mid-November with the Star Wars Series Imperial Stormtrooper outfit to coincide with Jedi: Fallen Order and was based off the Stormtrooper characters from the Star Wars media franchise. The outfit is still available until November 30, 2020, as purchasing the game on the Epic Games Store will grant you the Imperial Stormtrooper outfit for free. The next month, we got a huge wave of Sequel Trilogy characters like Rey and Kylo Ren to coincide with Star Wars: The Rise of Skywalker. We were even given challenges, additional cosmetics, lightsaber weapons and a live event where a scene from The Rise of Skywalker debuted. The cosmetics and lightsabers then returned the next season during Star Wars Day.

Stranger Things is a popular Netflix show that has aired 3 seasons, with a fourth coming at an unknown time. When Season 3 released in July 2019, Fortnite collaborated with Netflix to release Chief Hopper and Demogorgon outfits, a wrap, and the Scoops Ahoy! ice cream parlor from the show as a location. There were also Upside Down portals across the Mega Mall POI straight from the show, which was pretty cool.

Terminator is a very beloved science fiction movie franchise from the 1980s, starring Arnold Schwarzenegger. Midway through Chapter 2, Season 5, Sarah Connor and the T-800 terminator characters from the series became outfits in-game, along with an emote referencing the end of Terminator 2.

The Walking Dead is an admired AMC show, about a zombie apocalypse. I personally haven’t seen a single episode, so it was quite a surprise when Epic announced their collaboration during the Game Awards 2020! Outfits based on the Daryl Dixon and Michonne characters became outfits.

I decided to put an area for the minor collaborations. These crossovers were really just a video or concert played in Party Royale and were really one-trick ponies. The way I divide major and minor crossovers is with how many cosmetics they garnered, how much content they included and some additional variables.

Christopher Nolan is a popular film director, known for movies Dunkirk, the Dark Knight trilogy and Interstellar. In May 2020, a trailer for his then-upcoming project TENET premiered in Party Royale and a month later, a movie night was held showcasing one of 3 Christopher Nolan movies depending on your region.

Diplo is a music artist, who had several concerts take place in Party Royale. The first concert was in collaboration with Major Lazer and took place shortly after Party Royale launched, on May 1, 2020, the second concert was in collaboration with Young Thug and Noah Cyrus and took place on June 28, 2020 and the third was his final show, which took place on July 31, 2020 and offered a free wrap if you logged in during that time.

Houseparty is a popular social app, and often collaborates with Fortnite. In April 2020, there was another community challenge involving Houseparty and trivia, with the Fryangles wrap rewarded to all players afterwards. In November 2020, Houseparty teamed up with Epic Games once again for a new feature. On PlayStation and PC platforms, if you connected your account to Houseparty, you could see your friends’ faces while you played!

Quibi was a now-defunct streaming service that launched in April 2020, known for their short programs and advertising campaigns. When it launched, they showed off an episode of two of their shows, Punk’d and The Sauce over at Risky Reels. Now that they service is defunct, it’s hard not to cringe whilst watching the Risky Reels premieres.

In Chapter 1, Season 6, Ralph Breaks The Internet released, a sequel to 2012’s Wreck-It Ralph. In-game, we had the Hot Marat emote available for 0 V-Bucks (Since it was Black Friday) and in the actual movie, there were a ton of references and nods to Fortnite. Meanwhile, in Risky Reels, Ralph could have been seen, walking across the screen.